A new library in the Scottish baronial style will replace the current Brutalist library at Scots's College in Sydney.

It has been approved for construction despite modernist protests! pic.twitter.com/uj3tQqljIM

taking the cars off George St has injected a lot of culture into Sydney pic.twitter.com/r5SBdMEtLE

Kites and falcons in Australia have been seen picking up burning twigs to spread wildfires and flush out prey https://t.co/AYTXRCzlfr pic.twitter.com/hw08aeiUpe 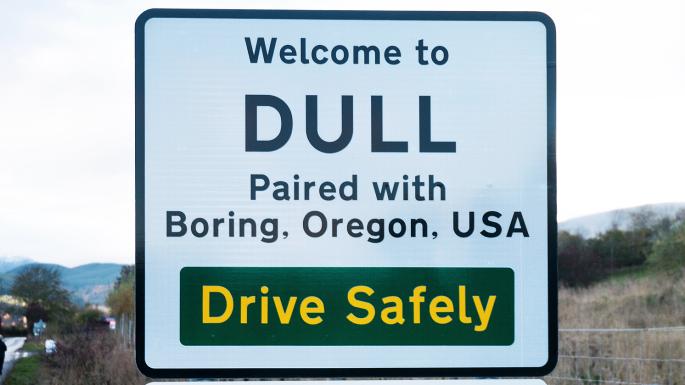 The road sign in Dull, Perthshire, has become something of a tourist hotspot

After Dull twinned with Boring it was only a matter of time before Bland got in on the act.Three of the world’s most tedious-sounding villages are preparing for a week of festivities to celebrate their, well, distinctive ordinariness.

Dull, a tiny community in Perthshire, is hosting a civic reception at the local cinema, where residents will be offered the chance to exchange niceties over a few drinks — nothing too raucous — with the mayor of Bland and his delegation on Friday.

Australian researchers have unveiled the world’s first 3D-printed jet engine, a manufacturing breakthrough that could lead to cheaper, lighter and more fuel-efficient jets.

Engineers at Monash University and its commercial arm Amaero Engineering are making top-secret prototypes for Boeing Co, Airbus Group NV, Raytheon Co and Safran SA in a development that could be the saviour of Australia’s struggling manufacturing sector.

From a recent edition of the print-only publication Coffee News:

Fresh, clean laundry is one of the most comforting things in life, but unfortunately not everyone has access to it. A couple of engineering students from Brisbane are trying to change that. They’ve started Orange Sky Laundry – Australia’s first mobile laundry service for the homeless.

20-year-old Lucas Patchett and his friend Nicholas Marchesi were inspired to start the service during an overseas trip. When they got back in July, they decided to stop talking about it and just do it. So they got an old van fitted out with two donated industrial washing machines and two dryers, which can wash and dry 20 kilograms of laundry in an hour.

Getting the machines to fit in the van wasn’t the easiest thing in the world, but they managed it pretty well. “The architect who helped us said: ‘they’ll probably fit’, but we found we needed to build a platform above the wheel arches – it wasn’t very scientific but we ended up banging the wheel arches out a bit and taking some panels off. We squeezed them in,” said Lucas.

“We’re trying to link in with some of the morning BBQs and food vans offered by different groups around the city each day,” said Lucas. He admitted that it has been kind of difficult to set up a schedule with the homeless, because most of them are kind of hesitant at first. But once they warm up to the guys, they seem to appreciate the service quite a bit. Lucas said that he enjoys being able to sit and chat with interesting people as their clothes are being washed. “I was chatting with a guy the other day who used to be a chemical engineer. It’s just a very grounding experience to see how quickly things can go wrong for people.”

Beer ice cream. Yes, you read that correctly. Artisanal Canberra ice-cream maestros Frugii were serving a range of beery ice creams, including lager sorbetto and Bridge Road Chestnut Pilsner gelato. I chose the one made with 2 Brothers Voodoo Baltic Porter, and my goodness but it was a revelation. The richness and chocolaty tones of the porter translated so perfectly into the ice cream medium. There was a little fillip of hoppy sourness that peeked through and even a suggestion of carbonation, although that may have been my mind at work. It isn’t often that I’m truly thrilled and surprised at a food product anymore, but this won me over from the first taste. Well done Frugii.

Will S.' Sunny Side Blog
Create a free website or blog at WordPress.com.